Where are the borders of the party district? 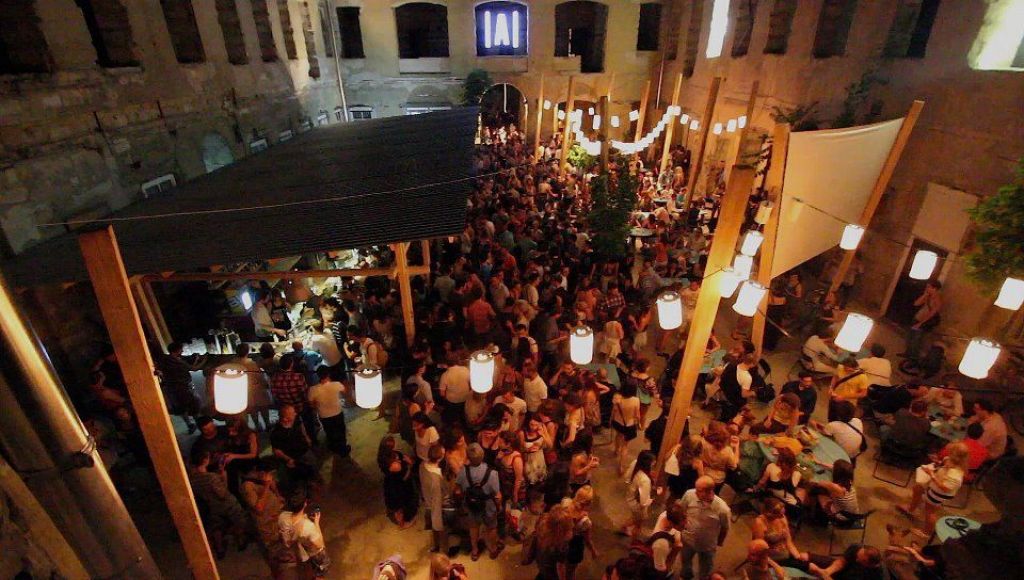 It’s hard to answer the question above. In a strict way it’s the polygon of Rákóczi street, the Grand Boulevard, Bajcsy Zsilinszky street and Deák square, but this way a lot of cult places are unfairly on the other side of the border. Budapest’s party district constantly evolves and changes, so it’s really hard to define its accurate size and location, let’s take a look on some certain parts!

Könyvtár Klub is one famous starting point, it’s the greatest university club of the city. The venue even has a garden called Treffort Kert, so you can find programs both in the winter and summer seasons, it’s a good start for a pub crawl night. After leaving, most people usually go towards the core of the party district which is Kazinczy street.

Budapest’s party revolution started in Szimpla Kert, which later infected the whole VIIth district. The oldest ruin pub improved the standards since then by refreshing its artisian beer menu not so long ago. Next to the pub you can stave off your hunger in the best gastro places of the downtown, from street food trucks to exotic and traditional hungarian restaurants. Whatever you choose, it sure will be fantastic!

On the way to Klauzál square you can find the real ruin pubs of Budapest with more and more locals each place. Old buidings were reborn as two great pubs: Füge Udvar and UdvarRom, where you can see how a classic hungarian loft building looked like back in the days. Beside drinking you can play with classic arcade games or table tennis there, and it’s even funnier when the games start to become harder thanks to your drinks. Regardless both places are gardens they are open in off-season as well, heated and covered.

Walking towards the Boulevard you can easily recognize 4-es 6-os Wesselényi pub, which is highly recommended if you want to party. The interior was inspired by the public transport system, and there are appealing booze discounts every night, and a huge mass inside and outside as well.

From here, Király street is just a few meters away: it’s the non-official main street of the party district. From the Boulevard to Deák square there are bars and restaurants all along, and Kazinczy street begins here too.  Halfway through there is Gozsdu garden, an arcade full of quality venues. And if you want to take another direction, you can check out the Opera House in a few minutes, and you’ll find Morrison’s Opera behind it in Révay alley. It’s an outstanding place of Budapest nightlife for 20 years now which is quite an achievement.